To Arms! To Arms! Federal Troops Advance on Jefferson

Gen. Nathaniel Banks and his Federal forces spent the spring of 1864 slowly making their way up the Red River but were repulsed by Confederate forces in battle near Mansfield, Louisiana. 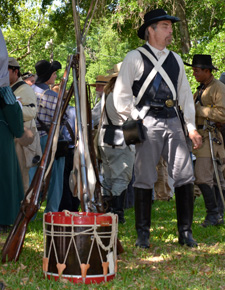 Had U.S. troops managed to fight through and capture Shreveport, the East Texas supply depots in Marshall and Jefferson would have been targeted next, cutting off Texas and her war material from the Confederate effort. 150+ years later, a slightly less wild-and-wooly Jefferson celebrates American history by hosting the largest Civil War reenactment in Texas. The one-time "King of Spades" river port becomes a palette for living history, with troops, civilians and sutlers camped throughout the downtown historic district. 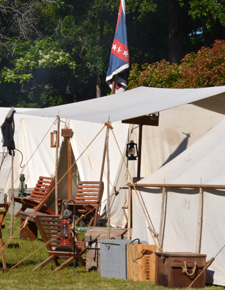 The production of this event is a partnership between the re-enactors affiliated with the Trans-Mississippi Volunteer Infantry and a special committee of Jefferson volunteers under the auspices of the Historic Jefferson Foundation. A portion of the proceeds from each event will be used to support historic preservation and restoration projects in Jefferson and Marion County. Remaining funds are used as seed money for future events.

All in all, the Battle for Jefferson is a fine flight of fancy played out in the field and on the streets. For this one magical weekend each year, the historic river port returns to her commercial heyday.
Re-enactor Registration

Re-enactor registration is $10.00 per person in advance, $15 at the gate. Children 8 and under, free. The registration fee applies to both civilian and military re-enactors. 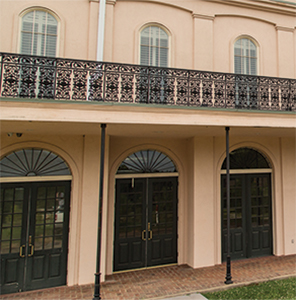 Returning to the event this year is the "Illumination" at old Oakwood Cemetery where hundreds of Civil War veterans are buried.

Admission to the "Illumination" is free. 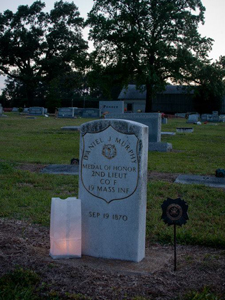 Thank You to our Sponsors, Let's Enjoy a 19th Century Stringband Jam

A Stringband Jam– free of charge and open to ALL reenactors and visitors at the historic Beard House located at 212 Vale Street.

Come listen to the sounds of period music as it fills the night air performed by camp musicians. 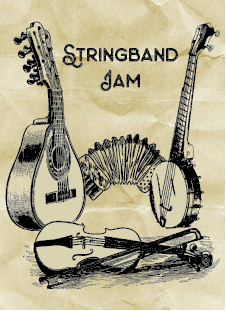 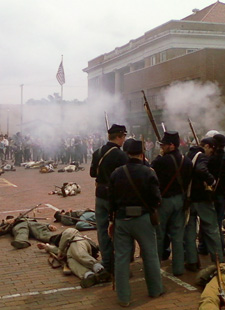 The tension mounts in town as Confederate and Federal forces spy one another's presence at the end of the Pilgrimage Parade & Downtown Skirmish.

The two sides hold a brief skirmish centered on Austin Street between Vale and Polk, then there's a break in the action as both sides prepare for the full-scale battle. 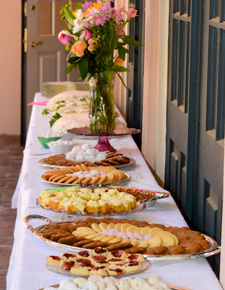 This event is open to the public with a $5 admission fee. Registered re-enactors are admitted at no additional charge. Period attire is strongly suggested though not required.

1st and 2nd Battles for Jefferson
Locations TBA
1st Battle: Saturday, April 30th
2nd Battle: Sunday, May 1st
$15.00 in advance, $20.00 at the gate, children 12 and under are free.
The sounds of battle will be heard up and down the lazy river that winds through Jefferson – booming artillery with pyrotechnic ground bursts, cavalry and infantry all play a part in the "enacted" full-scale battle. 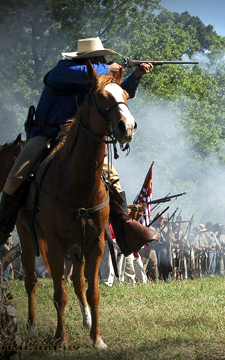 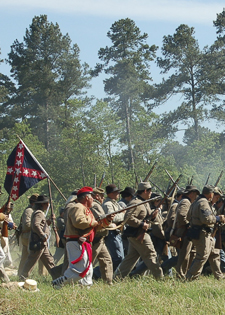 Will the Federal troops maintain their momentum from the Louisiana portion of the Red River Campaign and capture the important supply depot of Jefferson or will Confederate reinforcements arrive in time to route the invaders?

Sunday's closing battle decides the fate of Jefferson. Confederate and Federal troops again take to the field with more artillery barrages, cavalry charges and infantry engagements.
Muskets & Magnolias Grand Ball
Once the battlefield is cleared of casualties, the troops will return to their camps in Jefferson for a meal and preparations for the formal ball – "Muskets & Magnolias Grand Ball" - Saturday, April 30th, 2022 from 8:00 - 11:00 p.m. at at The Jeffersonian Institute featuring the 12th Louisiana String Band.

Period or Formal Attire Required. Admission is $25 per person. Registered re-enactors are admitted at no additional charge. 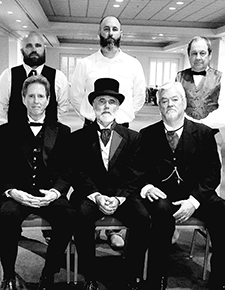 The musical selections are researched for historical accuracy, and the dances are authentic to the period.

This year's (2022) re-creation marks the 161st anniversary of Fannie Benners' presentation of a hand-sewn banner to "The Jefferson Guards" a Confederate unit raised locally in 1861. 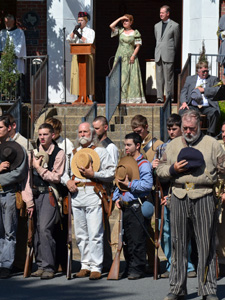 With troops at attention and roll called, Miss Benners' presentation is preceded by the reading of her moving letter, then followed by a musket salute from the troops. Coffee, donuts and juice is served afterward in the parish hall.

This moving event is free of charge and all are welcome to attend the 11:00 a.m. Eucharistic service.

ALL EVENTS OPEN TO THE PUBLIC

Locations: Throughout Downtown Historic District and Battle Locations TBD Never been to a Civil War Re-enactment?

Battle re-enactments are loud! For those with sensitive ears, we suggest bringing ear plugs. Pets are not allowed in spectator's areas! Please leave four legged friends at home.

Your excursion to 1864 is located on a working ranch. Wear comfortable walking shoes. Bring a blanket or folding chairs. Definitely have a hat or parasol for a protection from the sun!
Event Locator Maps
Friday, April 29th, 2022
All Day - Ticket Sales & Re-enactor Registration

About
Even the most casual of history buffs understands that Jefferson's role in the Civil War was only as a manufacturing and supply depot for the upstart Confederate States of America.

But 150+ years later, the historic river port stands front-and-center in what well may be the largest re-enactment of that era in Texas. 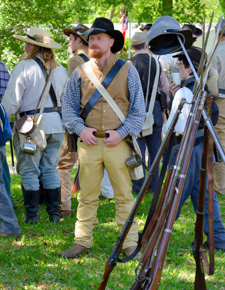 More than 700 Civil War period reenactors - soldiers and civilians both - are expected to descend upon the town the weekend of April 29th, 30th and May 1st, 2022 to enact "The Battle for Jefferson," a two-day tilt between Confederate and Federal forces. Infantry, cavalry and artillery all play a part in the scenario battle that gives life to what might have happened in and around Jefferson in 1864 had Union Troops been successful in the Red River Campaign and captured Shreveport. 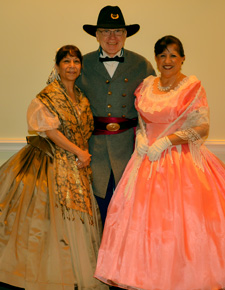 Coupled with the Jessie Allen Wise Garden Club's annual Pilgrimage, the "Battle" portion of the weekend has succeeded in turning Jefferson's downtown historic district and surrounding neighborhoods into a three-day living history encampment.

Nearly all of the troops and civilians are camped in town in full view of the visiting public. Others are camped near the battlefield.

Thank You to our Event Sponsors